Color Me Fifty Shades of Concerned

I bought Valentines yesterday. A few goodies that I knew my people would like. Some tokens of affection for my man, reminding him in a Hallmark way that he’s the love of my life. He’s not really a stuffed animal kind of guy (unless they’re wall-mounted) but, if he was, I would not have chosen one dressed in a gray suit, holding a mask and handcuffs, and bearing a card that says “Dominate Valentine’s Day,” like this guy: 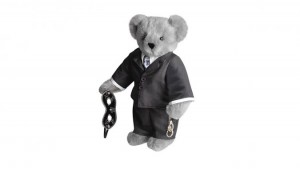 Nor would I have booked us a special hotel package “for you and your master” that included a necktie, bondage kit, paddle and spanking powder, tickets to the Museum of Sex, or free “Red Room of Pain” cocktails to enjoy with our aphrodisiac room service.

Yes, all of this is real and available to you, and everyone you know, in celebration of the upcoming debut of “Fifty Shades of Grey,” a film adaptation of the best-selling trilogy of books which were born out of online fan fiction for Twilight. The response to these books about a controlling millionaire who seeks to act out his deviant sexual desires with a virgin college girl (selling over 100 million copies), and now the movie, has been huge, the opening weekend (on Valentine’s Day) expected to break all kinds of records.

So, what’s the big deal, you might ask? It’s just a set of books, a movie, and the silly marketing hoopla surrounding it, after all, and maybe you’ve read them and are excited about seeing the movie this weekend, yourself. If that’s the case, no judgement here, but I’d like to give you my take, with your kind indulgence.

First of all, I’m not a complete innocent. I haven’t read these books (nor will I), but I have read a racy novel, or two, in my time. I’m not particularly proud of that, as it puts a lot of trash in your head that’s hard to get out, but it’s the truth. I’ve also seen movies with sex scenes that were a little more than implied. There is sex to be consumed any, and everywhere, that does not glorify a loving, marital relationship, and I’m in full realization of that. However, there is a big problem when it comes to normalizing domination, control, and sadomasochism.

Let me tell you a story.

I have had the privilege of walking alongside several women through different hardships. Three of them were really struggling with their overtly controlling and narcissistic husbands, but one, in particular, had a situation at home that was elevated to a whole new level. Initially, when she and her husband met, she was taken by his dashing good looks, easy way with business and making money, and extreme charm. It didn’t take long for a sexual relationship to begin, and even though he had very different tastes in that department, she went along with it, as he had a sway over her that she’d never experienced with anyone else. She was flattered and wooed by his singular fascination with her, and how he wanted to know every detail about her day, everyday. They had a lavish wedding, and eventually had children. However, with each passing year, he started controlling her life to the point that he made her quit her job, her volunteer work, seeing her friends, or even taking the kids to play dates. She rarely left the house for fear of his rage, or deep depression, because “when you leave I feel like you don’t want to be with me, or take care of me.” He even threatened suicide on a couple of occasions when she said she wanted to join a group at church without him…a bible study, which I was leading.

She obviously joined anyway, finally at a breaking point herself, and confided all this to me, telling me then that she was certain he had the house bugged and hidden cameras installed. One night, things really escalated between them, and she called me the next day, saying that she was really afraid, and that she needed to get herself and the kids out. Without thinking any further about hidden cameras (or anything, for that matter), I went over there, while he was gone for an hour, and helped her throw stuff in her SUV, getting them out of the house and off to a hotel in another town, under an assumed name. When I got home that night, telling Kevin everything, he was furious (and rightfully so) for the risk under which I’d put our family, and we slept, that night, with a loaded gun next to the bed.

My friend survived. She is divorced, but it took years, and she’s had to undergo extensive counseling to undo the affects of that emotional and mental roller coaster of abuse. The other women who lived in this type of environment also eventually got out, but they all still struggle with relationship issues and battling the verbal bashing that lingers in their heads.

I tell you all of this because the character, Christian Grey, has problems. He is a poster child for this type of controlling individual, but instead of being a warning of what not to become entangled with, he’s being sold as a sexual fantasy. And the more this type of behavior is sensationalized, and offered up as glamorous and fun, the more normal it will be for guys to think it’s okay to expect whatever sexual/controlling violence they want, and girls to think that if they put up with it long enough, the guy will actually love them, and change.

To me, it’s not only tragic, but very concerning if this is what we’ve had to stoop to in order to be entertained.

It’s very concerning if this is the future for my granddaughters and grandsons.

The problem with this line of thinking, in my humble opinion, is NOT fifty shades of grey, but absolutely BLACK AND WHITE.

I appeal to you, brothers, to watch out for those who cause divisions and create obstacles contrary to the doctrine that you have been taught; avoid them. For such persons do not serve our Lord Christ, but their own appetites, and by smooth talk and flattery they deceive the hearts of the naive. ~ Romans 16:17-18 ESV

There’s more to sex than mere skin on skin. Sex is as much spiritual mystery as physical fact. As written in Scripture, “The two become one.” Since we want to become spiritually one with the Master, we must not pursue the kind of sex that avoids commitment and intimacy, leaving us more lonely than ever—the kind of sex that can never “become one.” There is a sense in which sexual sins are different from all others. In sexual sin we violate the sacredness of our own bodies, these bodies that were made for God-given and God-modeled love, for “becoming one” with another. ~ 1 Corinthians 6:18 MSG