by mkgarman | Feb 5, 2016 | About Me, Eyes Wide Open, Get Real, God in the Everyday, He Knows Me, He's Bigger than Me, Healing Hearts, Heart talk, His Words, Hope, In the Eye of the Beholder, Life Abundant, Listen and Learn, Living the God Life, Lover of My Soul, Truth, Under His Wings | 1 comment

I love any and all shows having to do with history in a broad sense, or, more specifically, the stories of people’s lives. I really love genealogy shows, for this reason, and was recently watching an episode of Finding Your Roots.

While finding out her family’s slavery background, African-American guest, Donna Brazile, recollected what her mother had told her as she was growing up in the volatile racial climate of the south.

“Donna, you remember that it’s not what they call you, it’s what you answer to.”

Obviously, Donna headed her mother’s advice, as she grew up to be the first African-American to manage a presidential campaign, and is now a veteran political strategist. While others may have called her names because of the color of her skin, she chose not to answer.

I have not been called names based on my skin color, but I am called by other names besides Melinda. Honey, Mom, Mimmie, Mrs. Garman, Ma’am; I answer to them all, and proudly. However, there are other names that I’m called in the confines of my own head that no one else hears. These names are whispered, sometimes by me, but mostly by the enemy of my soul. Stupid, Unworthy, Unlovable, Fat, Ridiculous, and on and on and on. And sometimes I’ve been known to answer.

I know I’m not alone here. My enemy is your enemy, too. He never shuts up, spewing venom like the snake he is, and when we start answering to his names, it pulls us further and further from the path God has us on, to the point where hearing God’s calls becomes a little more difficult. Yes, our enemy is relentless in his pursuit, but you know what?

And He never sleeps.

Calling out an exquisite symphony of names, His melody floats on the air of our souls.

Perhaps today is the day to tune your ears in a different direction and listen to the LOVER of your soul, and then ACT. Because, remember, it’s not what you’re called, it’s what you answer to. 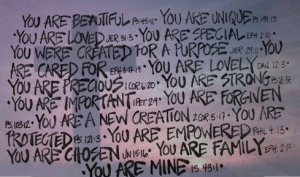