Lilli has been riding since she was two. She first sat atop a horse when she was only a few months old, held tightly by her Aunt Maddie and sporting a non-stop, gummy, drooling grin. But she was led around on a horse, alone in the saddle, when she was only two, and has continued her education ever since. These were full-size horses, and she never showed an ounce of fear.

That is until this past summer.

She took actual, formal riding lessons with Maddie, along with another little boy, since she had moved to Texas and was actually around consistently. Up until one particular lesson, she had held onto the saddle horn, in addition to the reigns, and Maddie was trying to get her to let go, and hold onto the reigns alone. Her horse broke into a trot, and she felt like she wasn’t holding on at all, and from that point on, she didn’t want to trot, choosing to walk everywhere with a death grip on the horn.

Maddie tried just about everything, until she had an idea at Christmas. We had talked about getting a miniature horse for our therapy program, that would be a good “first touch” for kids who either couldn’t ride, or were frightened of the larger animals. She decided that she wanted to purchase the animal herself, for Lilli (and to teach Brody, who has also been a little reticent), as a Christmas present, to help her gain back her confidence from not so far off the ground. 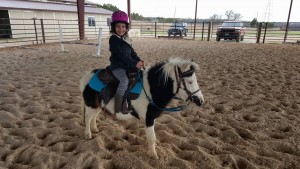 Named for a favorite “My Little Pony,” and called AJ for short, he has completely stolen Lilli’s heart. She can walk him around the front yard, completely unattended. If he knocks her over (which he did, once) it’s like being bowled over by a large dog. She picked out that snazzy blue saddle pad (because “it matches his eyes and blue’s my favorite color!”), and yesterday, she got to try it out.

Holding the reigns only, she agreed to make him trot.

After a quick jaunt around the round pin, she said “that was FUN!” flashing her brilliant smile, and talked non-stop about it when she came back up to the house.

Sometimes there are things that derail us from the direction we were headed, because something happened that scared the pants off of us. The longer we mull over it, the worse the long tendrils of fear tighten their grip. We know, in our heart of hearts, that we should get back in the saddle right away, but we can’t seem to climb back up there.

Maybe, just maybe, we should try a different approach and start small.

Maybe, just maybe, we should face our giant, first, in miniature form.

What’s scaring you today? Why not be a conqueror from a little closer to the ground, and build your confidence to climb astride that race horse in the stall? You can, you know. Nothing is as giant as your God, and it’s His strength that makes you an overcomer.

For I can do everything [ANYTHING] God asks me to with the help of Christ who gives me the strength and power. ~ Philippians 4:13 TLB (parenthesis mine)